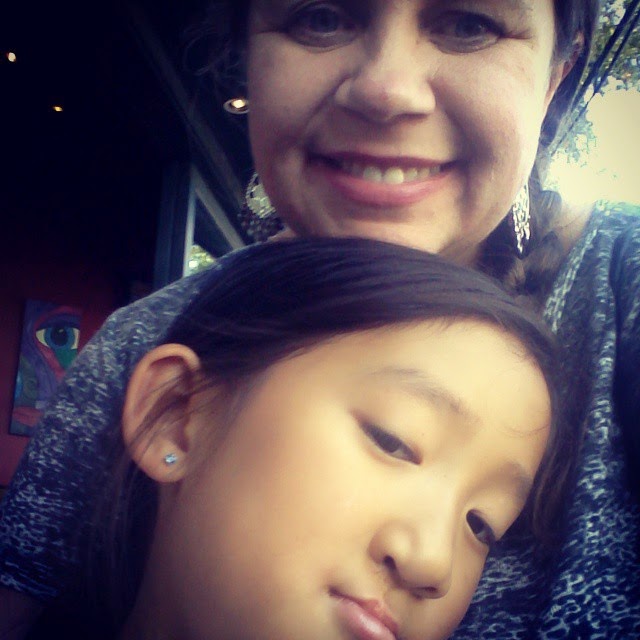 The Moon and I waiting to be seated at Tenn16.

It was a great weekend.   My in-laws came up for the play and a weekend fine dining at home, watching my daughter's play and a girl's day out in East Nashville.  After visiting the Shoppes on Fatherland and Woodland, we headed over to Tenn16 for a much recommended Cajun lunch.  Despite the crazy busy East Nashville crowd, we were seated fairly quickly for a late Sunday afternoon brunch.  Having arrived just before the switch from brunch to the regular menu, we ordered drinks and the Deviled Egg sampler.  The sweet tea was just right and the eggs were enough to keep three adult females and a child from starving after a hard day of shopping. We then placed our main course orders and that's when the review gets a little less than perfect.

My recommendation is a yes.  Try this restaurant.  Great vibe.  Great food.  Just be sure to let the waitress know up front that you like to keep your drink filled.  Thumbs up for Tenn16.

Posted by danacroy at 5:00 PM No comments:

Anne O'Malley's - Where the Locals Eat 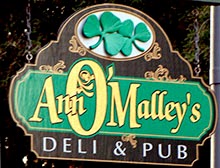 Today we had a long lazy day at the beach.  The weather has been spotty so we grabbed our sunny day while it lasted.  Knowing we had 7:30 tickets for the Ripley's Ghost Train we headed into town at the last minute for a bite.  We were hoping for a pub with fish and chips but when we sat down at Anne O'Malley's we realized it was sandwiches and beer.  Oh well. We are suckers for any place playing Celtic music as we are a family descended from strong Anglo stock and love anything Celtic!

The service was casual - so don't be in a hurry.   I ordered a corned beef reuben with homemade thousand island dressing.  My hubby got the turkey club and my son ordered a pastrami on white.  They were all great and quite filling.

While we ate, the pub filled up with locals as it was Thursday's trivia night.  We knew they were locals - young and old - by how they greeted one another.  The pub is perfectly located at almost across from the Fort so we were able to quickly walk down the street to Ripleys.  We could have easily strolled the Old City from there as well.

Hoping to come back to St. A's next year we will come in on a Thursday night when we have more time!

Posted by danacroy at 5:02 AM No comments:

After a day of sightseeing in the Old City in St. Augustine, we gave in to our children's pleas of pizza. I am not a huge fan of pizza (tasty but harsh on the tummy) and so at home we only order it about once a month. Having already spotted Pizzalley's and seen the Chianti Room reviews online, we asked the park rangers at the Castillo de San Marcos what they recommend. Pizzalley's.

We arrived just in time for happy hour and music. We did not take part in any happy hour specials, but I must say they were good. BOGO on all drinks plus a slice of cheese pizza for all partaking of the drink. In addition, if you are having alcohol, you get $5.00 off a large pizza. Not bad!

The kids each wanted their own pizza and our little one had a kids pepperoni ($4.99) and we ordered the 10-inch personal pizza for our 12 year old. The kids pizza (which we could have ordered for the 12 year old) was quite large and we regretted ordered the $10 individual for him when he could have eaten the kids portion. The hubby and I ordered the Garbage Can with pepperoni, sausage, peppers, onions, mushrooms and black olives. Normally we go in for a Greek or Margarita, but we went all out. Oh my! The pizza was delicious, the crust just the right blend of think and thin and slightly crunchy. The toppings were numerous. In addition to the pizza we ordered breadsticks while we waited as this was a late lunch/early dinner for our family and we knew we would not eat again that day. The breadsticks and olive oil were perfect as was my sweet tea!

Our son (remember the 12 year old) reminded us that we never order dessert and that we are on vacation. And, our 8 year old was entranced by the singer setting up shop in the corner. So.....creme brulee, chocolate toffee mousse cake and another glass of sweet tea were ordered. We heard a few songs, ate dessert, boxed up our leftovers and headed to St. Photios to finish out our day.

Posted by danacroy at 6:13 PM No comments:

While we are definitely eating "at home" for most of our trip, we are eating a few favorite local/tourist spots this week.  Last night we headed to Sunset Grill.  It had great reviews by both sets (locals and tourists) and we had a few folks who are regulars to this beach tell us eat there.  After a long day at the beach we dressed in what I am calling "upscale beach" and headed into town.  Sunset is a delightful restaurant and due to our off-season travel, we were able to get a covered seat upstairs. Oh!  We went on a Monday night, so again, great seating.

We started the meal with appetizers, which we rarely order as we are, well, budget conscious. Mozarella sticks and coconut shrimp were tops on our list.  Our daughter was allergic to most of the options and the Mahi was only served rare, so these were what we decided upon.  To be honest, they were both pretty standard though they were reasonably priced.  My hubby and I ordered sweet teas while the kids ordered sodas.  The teas were good but not the best I have ever had (if you've ever read my blog you know I'm a sweet tea snob).

The orders were placed as follows:

Our 8 year old had fish bites and fries which she very much enjoyed.  The portions were ample and she now has a second meal for lunch tomorrow!

The 12 year old got All-American burger with a loaded baked potato.  The cheese sauce on the potato looked as if it came from a can but the meal itself was large and he has leftovers for lunch as well. 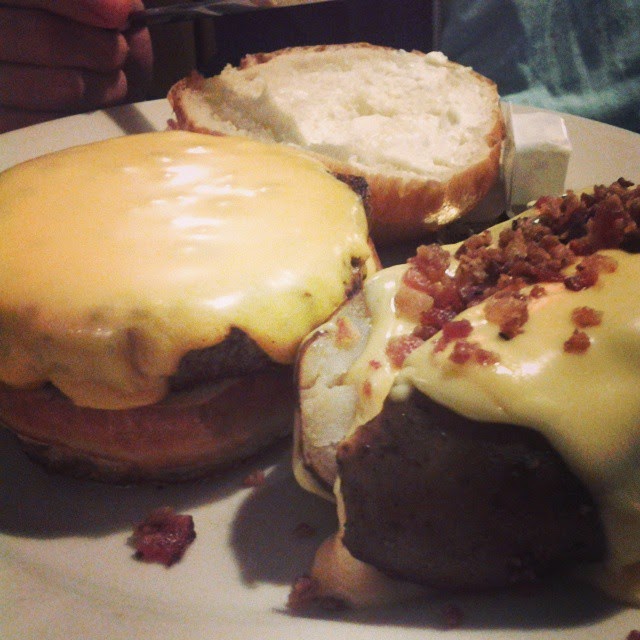 My husband ordered the Grouper in the seafood cream sauce with a grit cake and corn.  He very much enjoyed it I would say as he left nothing on his plate but we both agreed the grit cake was somewhat bland and the grouper would have been better with a lighter hand on the sauce.  It had a great taste but was a little too much. 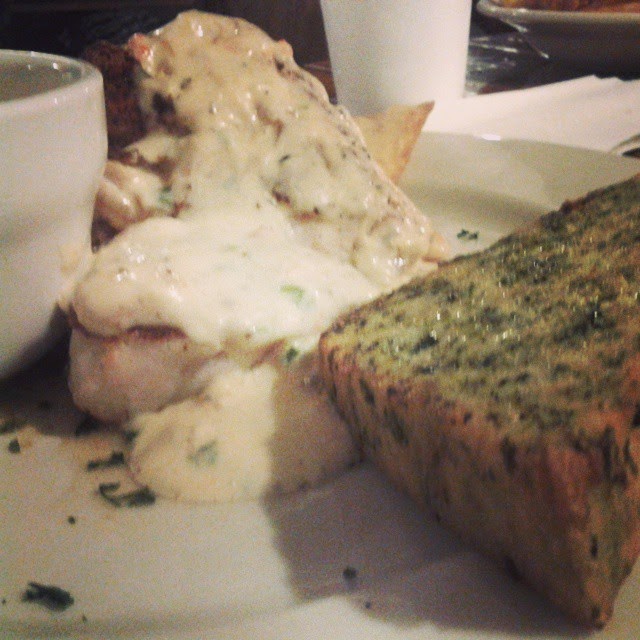 I had the fish and potato wedges.  The fish was GINORMOUS!  It was a tasty piece of fish.  The wedges were hand cut and fried.  The tartar sauce was just right.  Not sure if it was made in house but it seemed as if it was.

The service was excellent!  I don't know that we would come back here but for a newbie to the area, it's certainly a place to try.

Posted by danacroy at 5:47 PM No comments:

We headed down from Nashville last Saturday to Crescent Beach in the northwest corner of Florida.  After a long drive and many hours to determine where we wanted to eat dinner once we pulled into the St. A area, we settled on South Beach Grille which was 2 miles from our condo.  Nashville is a major foodie town (according to every major magazine and newspaper in the country and from persona observations).  And I consider myself a fairly skilled home cook, so it has to be great to impress us (especially my husband who I can assure you is quite spoiled by my cooking).

We like to vacation in the off-season and are at the beach in late September (another benefit of homeschooling).  So, there was no wait at 8PM on a Saturday night.  We asked to be seated outside and were quite cozy despite the lower evening temps and storm that blew in that evening.

Sweet teas were ordered all around which were really just okay (sweet teas snobs) and proceeded to order our entrees.   They were as follows:  our 8 year old had the fish bites (fresh and breaded in-house) and apples (which were also sliced fresh btw); 12 year old ordered an adult burger and fries (the burger was hand-patted and substantial and the fried delicious, though probably not hand-cut); my husband had the fish tacos which did indeed have a fresh made salsa (which he loved) and I had the crab cake dinner (crab cakes where house made and though different from a Maryland crab cake and I would definitely order them again).   The entire family thoroughly enjoyed their meals!

The service was great and the meal was only around $65 with tip.  We are hoping to go there again on our final night here. 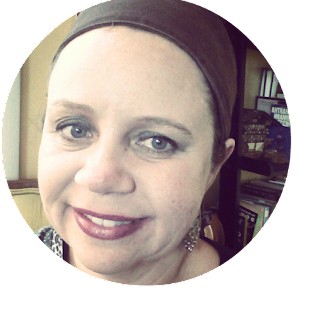